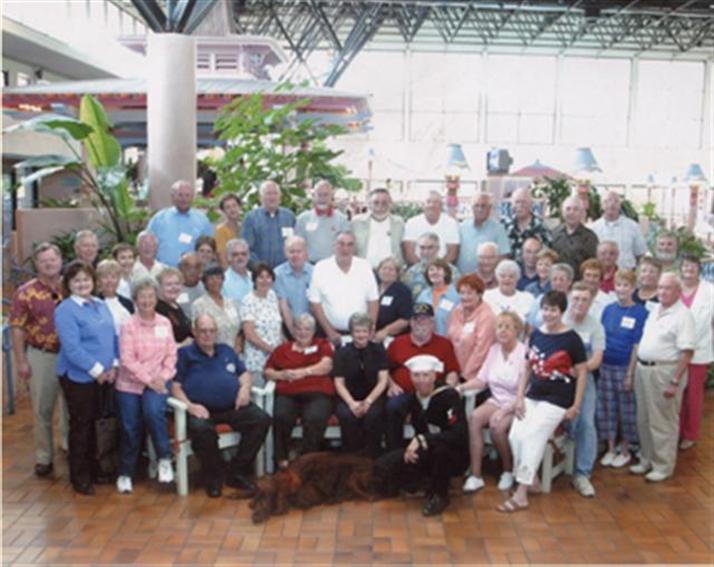 The 2004 reunion of the USS/USCGC Lansing was held from October 20 through the 24th in Jacksonville, Florida. Folks began arriving on the afternoon of the 19th, which permitted an easy registration and early evening get-togethers, as we caught up with old friends.

The reunion got underway Wednesday morning when we traveled to the oldest city in America (no cracks, please, about old people and old cities), St. Augustine. While there, we took the Red Train tour of the city as the guide gave us the fascinating history of this beautiful city. We visited the Fountain of Youth, but unfortunately, it didn’t seem to have any effect on any of us. At the end of the Red Train tour, we enjoyed a view of the city from the sea as we took a tour of the harbor, aboard the Victory III sightseeing boat.

Thursday morning saw us back at sea as we cruised the St. John’s River in the Jacksonville area. The cruise featured a buffet lunch and live musical entertainment, as well as giving us a view of the bustling port of Jacksonville.

On completing the cruise we returned to the hotel where we held our business meeting. At the meeting, Terry Moberg, our long-time reunion coordinator, announced that, due to various personal reasons, he would be unable to coordinate any future reunions. After much discussion, it was voted to discontinue the annual formal Lansing reunions, making the 2004 reunion our final one.

After the business meeting, Renate Mannes was hostess of the spirited ladies gift exchange. There were reports, unconfirmed by the writer, that it was a time of devious gift grabbing and general hilarity. Thanks, Renate, for all the work you’ve put in over the years to make this event so much fun.

In the evening, the Association held its annual Welcome Reception. Jim Holland, who was the last officer to leave the Lansing, and in fact, signed her over to the Reserve Fleet, gave us all a short talk on the last cruise of the ship, from Pearl Harbor to Seattle. It was somehow fitting at the final reunion for him to share this experience.

Friday morning saw us back on the road again for a trip to Amelia Island, Fernandina Beach and Fort Clinch. Fernandina Beach featured many interesting shops, eagerly patronized by the ladies. Fort Clinch offered an entertaining, interactive narrative by a guide who portrayed a soldier’s life in that Fort during the Civil War era.

Upon returning to the hotel, we had our group picture taken. This year featured the newest addition to the crew—Ernie—a worthy canine crewman.

Friday evening found us at the rustic Alhambra Dinner Theatre, where we enjoyed a delicious buffet dinner and the Rogers and Hammerstein classic musical, "Show Boat".

The Jacksonville Zoo was our destination on Saturday. On our return from the Zoo, we stopped at perhaps the most enjoyed stop on our tour, the Budweiser Brewery. As well as explaining how beer is brewed, the folks at Budweiser provided us with samples of their various beers.

In the year since our 2003 reunion, we lost forty of our former shipmates. On Sunday morning, Ron Bond, Ed Rother, and Ken Hill led the memorial service, which honored their memory.

We have enjoyed 10 wonderful years of formal reunions during which we’ve shared old memories, had great times, and cemented old friendships. As we move on, may our crew have fair winds and following seas for the remainder of our days.